Taking Madrid to the USA

Okay, we're talking trademark registrations here and Madrid protocol applications administered by the World Intellectual Property Organization (WIPO). The trouble with this excellent system for applicants is that when you designate the US you invite trouble and for this reason MARQUES held a seminar recently in London to try and show the way out of this problem.

As someone with roots in the North-West of England, I naturally read the letters MGS as Manchester Grammar School. As someone engaged in helping businesses with registration of trade marks, I need to amend my thinking and read the letters MGS as Madrid Goods and Services Manager (being a tool provided by the International Bureau on its website at www.wipo.int). During the course of a very interesting afternoon, André Ntamack (being Head of the Quality and Training Section of the Madrid Registry at WIPO) provided the statistics that : (1) During the period from January 2015 to February 2016, some 60.37% of Madrid Applications from Applicants in the UK contained Irregularities of one kind or another. 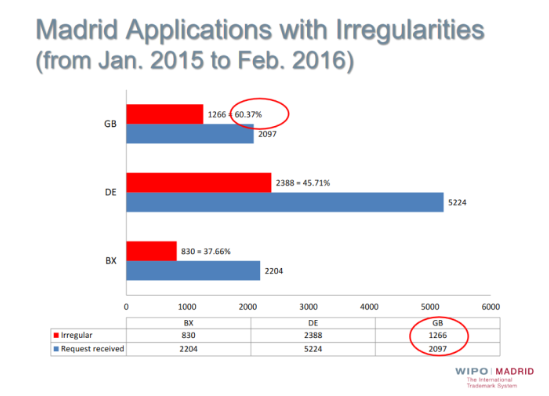 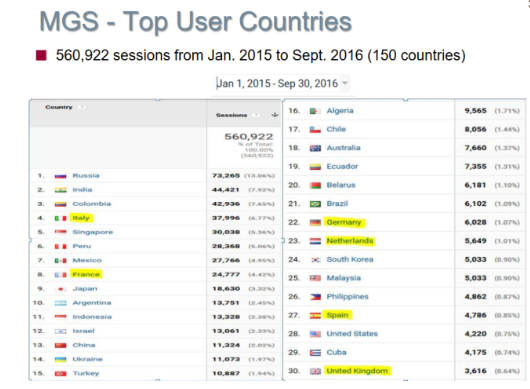 André’s hypothesis is that more use of MGS by people based in the UK will reduce the number of Irregularities – both generally and with regard to Applications designating the US.

A key feature of MGS according to Andre’s presentation was its ability to check Acceptance / Rejection of a particular term for goods or services in a designated Contracting Party : his slide showed functionality as follows : 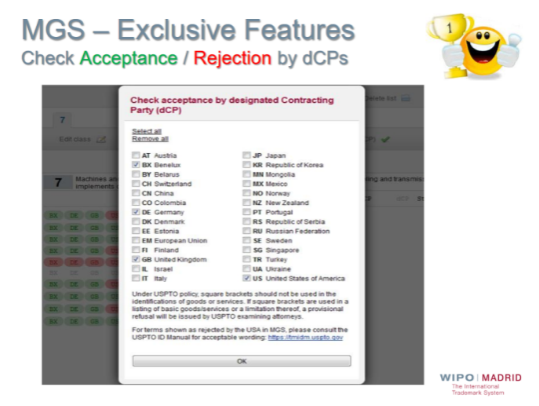 This looked exciting – particularly as Karen Strzyz of the Office of Policy and External Affairs at USPTO had included in her (extensive) list of “where things go wrong when the US is a designated Contracting Party” the fact that (for example) USPTO does not accept terms in brackets. So this morning, on looking at the functionalities of MGS – assisted by its Tutorial - I was disappointed to find that being able to check Acceptance / Rejection of a particular term for goods or services in a designated Contracting Party (aka dCP) will be with us “soon”. [Editors note : you do now get an answer but an awufl lot of terms seem to be answered dCP Status unknown]

Both MARQUES and USPTO must be congratulated for taking on the challenge of bringing this Seminar to London. I ended the afternoon feeling I’d sat through the first round of a boxing match where there were four parties in the ring, namely, the International Bureau, the USPTO, the UK Attorneys and the UK Holders.

Gavin Stanton of Pennington Manches put forward the excellent case for preferring a UK Application to an EU Application as the basic Application for an International Registration and may well have expected (as I did) there would be more discussion on drafting of specifications. [Editors note : a basic Registration is always preferable  to an Application any day, but the UK IPO do allow you to supply the form by email whereas you still have to fax or post it to EU IPO. I may have just been very unlucky but the EUIPO did make a bit of a howler losing a country for me, whereas I always know that I can speak to someone in Newport if something has gone wrong]

But André for the International Bureau and Karen for the USPTO combined to deliver the message that a successful outcome (for all International Registrations designating the US) depends on understanding both the ways of the Bureau and the ways of the Office. The ways of the USPTO include (i) having some 500+ examining attorneys with something like 80% working from home and (ii) an initial refusal rate that’s 84% for local (TEAS) Applications (whereas the figure for Applications filed through the Bureau is 97%) and (iii) all examining attorneys being trained both to deal with Applications filed through the Bureau and to back up refusals with the same quantity and quality of evidence as applies to local (TEAS) Applications.

The US has been a party to the Madrid Protocol for 13 years (since November 2003) and maybe it’s not been appropriate for a Seminar of this kind to take place until the USPTO has had the chance to run through a full cycle of Applications and (for example) see how many Applications getting onto the US Register via the Madrid Protocol cope (or don’t cope) with the “Declaration of Use” requirements (at 5th/6th anniversary of US Registration and at 9th/10th anniversary). I think the Seminar probably holds a record for the number of times those presenting extended the invitations “Let me know more about that” and “Please get in touch”. There’s definitely a need for dialogue and this blog does my bit : I look forward to the International Bureau reporting on the uptake of upcoming functionalities on MGS !

[Editors note : the TMClass  from EU IPO offers similar functionality but is not quite as smart about reminding us to eliminate the brackets. My top tip when filling in the MM2 is to take advantage of the possibility of drafting a US specific specification which is narrower and definitively within the US guidelines as well as something you are certain of having early use for. It's also a jolly good idea to have a friendly solo practitioner stateside who can efficiently deal with classification edits. With some specifications of goods they are inevitable, and negotiation is nearly always necessary. I'm thinking of a recent encounter with a specification for filters]