Fellow Patent SOLO James Peel of J.P.Peel & Co Ltd has been taking a look at the recently published Consultation document from the UK -IPO as they seek to balance the books. Here is his summary:

The proposed changes are a balance between a desire to increase income whilst changing the behaviour of applicants to simplify the UK IPO workload, particularly by encouraging applicants to file “better quality” patent applications. As an example, they report that in one year, ten individuals filed 3000 patent applications of which 51 were examined and only three resulted in granted patents which were renewed for just a few years.

The UK IPO says that they break even on costs/income after a patent has been renewed for 15 years. The fee increases may be needed to pay the salaries of the new patent examiners as their numbers have more than doubled in the past six months. Pressure had been exerted by CIPA to sort out the backlogs which were making it hard for the UK IPO to meet their own deadlines. Some years ago, national patent offices in Europe appeared to be struggling to find a role for themselves with a drop off in filings because of the success of the EPO. The UK IPO marketed itself as providing a fast and low cost route to patent protection. This appears to have been successful but at a cost to their non-urgent work. It must be a sign of confidence in their strategy and offering that the UK IPO are putting their fees up.

The new fees are a charge of £10 for each page over 35 pages to be included in the application fee and a fee of £30 for each claim above 15 claims to be included in the search fee. The UK IPO predicts that the introduction of a claims fee will increase their income per case by about £210 as the average case has 22 claims. This calculation assumes that the behaviour of applicants will not change. I wonder if they took the elimination of omnibus claims into account. Also, the fees for long specifications in other jurisdictions can largely be eliminated on most cases by careful choice of font size, margins and line spacing.

In percentage terms at least, the biggest change is to the application fee which in one proposal is being tripled from £20/£30 to £60/£90 with a 25% surcharge for late payment. It is this fee which is aimed at dissuading “frivolous” applications. Such an increase in upfront costs is balanced with smaller increases to the search and examination fees.

There are greater fee increases for paper based transactions and so I wonder if we are being guided towards online transactions.  (Wonder no longer, James, the UK is going digital). This may inadvertently favour lone applicants as online transactions are on a case by case basis: it is not possible to make batch payments online.

Following the unpredictable result of the dramatic increase in claims fees at the EPO in April 2008, it is good that the UK IPO are consulting about the changes. It is now up to us to respond.

We are invited to respond by email by 6 June 2017 (Note the precise 11:45pm deadline). The earliest date on which the new fees could come into force is 1 October 2017. 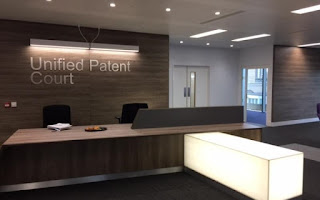 To keep up to date follow BristowsUPC and for the progress of the court see the official Unified Patent Court site. You could also stroll past the court building in Aldgate and dream of appearing there
Posted by Filemot at 10:21 2 comments: