Don't Hold Me Back

One of the biggest obstacles to leaving your firm and going SOLO is the restrictive covenants in your existing employment contract. Equally if you are taking on staff these contractual terms matter if your firm's book of business is not going to walk out the door. Case law is infrequent so I took note when  Michael Scutt tweeted about his blog on the Farnsworth case.

In this case Mr Lacy had been promoted during the course of his employment but had not signed the new contract that he had been given. He sought to argue that the restrictive covenant, which was for 6 months and prevented him working for a competitor and soliciting defined customers, did not bind him because the contract lay in a draw unsigned.

The obvious lesson for the employers amongst you is not to crack open the celebratory champagne or pay the new salary until the contract is signed.

As always, this case is very much on its own facts. The problem arose out of the take over of Pooles of Wigan as reported here.  The Judge was (rather against his inclination ) deciding a preliminary issue as to whether Mr Lacy was bound by his contract and must suffer a few more months of an injunction that was already in place. He does. The Judge ending up relying on the evidence that Mr Lacy had applied for private medical insurance (PMI) for his family, a benefit to which the new contract entitled him.

The law applicable to the case is basic contract law (paragraphs 19 to 31). The judge had to decide whether the offer in the revised contract had been accepted.  The Claimant enforcing the contract carried the burden of proof. There needed to be "an unequivocal act implying acceptance" and in accordance with the Solectron test this must be "only referable" to his acceptance of the new terms.

While the Claimant started out with five possibilities: revised salary; provision of a better motor car;  enrollment in a profit related incentive plan; movement to a defined contribution pension scheme, and the application for PMI. Only the last was only referable to the contract. Sadly litigants often forget that winning on four points and losing one is still a loss.

Of course if you can't work for a competitor you might be able to set one up, but be wary of any reasonable solicitation covenants as even the legal advice may be expensive and inconclusive.

There is no shortage of marketing advice out there. Everyone seems to be prepared to offer me some service to develop my professional image and bring in new clients. Our Professional Bodies ITMA and CIPA are offering a Webinar that will tell us how to do it and it seems we have come a long way from the days when a brass plate and a tombstone advert in Yellow Pages were considered daring. Even the EPI consider that European Patent Attorneys can advertise


Advertising is generally permitted provided that it is true and objective and conforms with basic principles such as integrity and compliance with professional secrecy.


Publicity and promotional activity of any kind by regulated persons is permitted if it is fair, honest, accurate and is not misleading and is not otherwise in breach of these Rules.

Networking - some of our bigger competitors are enjoying an #AIPPI2012 trip to Korea at the moment, article writing, and websites are now the norm.

This blog's co-found Shireen Smith of Azrights has gone one further in adding value to advertising material and is selling her educational and informative book to her target audience.

Our competitors are banding together in marketing groups like Quality Solicitors, who are also producing jolly TV adverts that can gain even greater publicity by social media, such as this.

While these methodologies may be perfect if you want to grow your business and recruit, they may not be ideal if you want to maintain a steady workload. For that, perhaps we need to nurture our existing clients and work referrers. Of course if you have been too successful with the marketing techniques, you can perhaps pass some on to another SOLO practitioner.

I would love to see some comments on how others are managing to control the workflow.
Posted by Filemot at 14:36 No comments:

Party time: the Law Society may need you 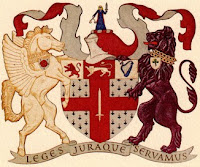 This blogger understands that the Law Society for England and Wales will soon be recruiting new members for its Intellectual Property Working Party.

If you are interested in joining the Working Party, why not email Isabel Davies for further particulars? It would be good to know that, at a time when IP litigation has trickled down from the Court, through regular Patents County Court to the new small claims track, the experiences and understanding of smaller practices are shared with their bigger brethren.
Posted by Jeremy at 08:34 No comments: