A visit to London from Alicante: OHIM British Day Postcard

The flags were still flying outside Westminster Abbey in honour of the 60th anniversary of the Coronation as members of the UK profession gathered to meet OHIM and UK officials  at 1 Victoria Street ( the well-appointed BIS Westminster Conference center)   nearby to share the hospitality of OHIM at OHIM British Day. We were honoured by the presence of President, António Campinos as well as the exuberant Inge Buffalo and Dimitros Botos. On the UK side John Alty as Comptroller was there with Sean Dennehey who is now responsible for both patent and trade mark operations within the UK office. It seems that a visit with the Minister may have been responsible for the delayed start and late arrival of the leaders. 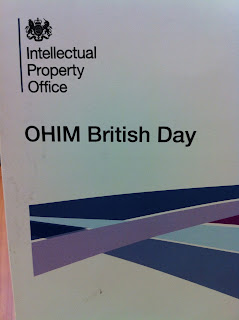 Now that the UK IPO and OHIM are using the same IT engine (in the UK its called TM10)  for managing their trade mark databases, can we expect even greater convergence?
OHIM continues to emphasise timeliness as the core of its Quality metric and there is no doubt that, in some areas, it is impressive with designs being registered within a matter of hours. I did take the opportunity to express concern that the Board of Appeals and subsequent appeals were often not timely at all and where this resulted in enforcement delays as with cancellation actions, that was not the quality brand owners needed. However that was perhaps the only *meanness* (their word) shown to the OHIM delegation at least in the public morning session. I cannot say whether the private afternoon session with ITMA and other representatives of the interests was more contentious.

It seems there will be a new OHIM website going live at the end of the year. Its services will be piloted with the biggest users - so not you and me. I spoke to two representatives of said biggest users over the lavish refreshments and learned that despite the volume of business they do with OHIM they do not yet use MyPage. Maybe they need to take some consultancy from solos like us on how to be efficient in a paperless way.

We heard about the tools being created under the Co-operation Fund  programme under the auspices of the European Trademarks and Design Network (ETDN) .That link will take you to their new page and the interesting tools they are working on. Some like the similarity tool you can play with and there are plans to integrate them with the mainstream in due course. Classification and its convergence has attracted a lot of post IP TRANSLATOR interest, not all of it now hostile. There seems to be a new recognition that clarity of specifications without the wild land grabs made possible by class headings in three classes is desirable. Nevertheless the imperatives of translation have led to an assessment that only 11 sub parts of the WIPO class headings are in fact insufficiently clear leaving 186 phrases you can use following a report made in May 2013. Meanwhile, if you need real IP translating the translate button in Euroclass now renamed TMClass as it is not limited to Europe, works miracles of high quality translation of specification terms useful for your global portfolio.

The Observatory also had its own presentation and is set to become an important policy setter. Its principle immediate objective is to complete research on mapping the landscape of IP enforcement  and that means understanding citizens' perceptions of it and they do mean copyright as well as patents and trade marks. The US has reported that 27.7% of jobs are IP related and 34.8% of US GDP is IP related. We should soon have comparable figures for Europe and they are not expected to be uniform across the region. Once we know, expect to see IP campaigns coming to a cinema screen near you. The IP toolkit will give you an idea of the messages you are likely to hear.

OHIM intend to *Keep Walking* towards a more efficient future and we hope to be by their side in this journey which we all hope will benefit European jobs and economies.