Sally is surprised by European wisdom on her beauty care regime

Our Sally Cooper is a right fashionable lady and she's always up there at the cosmetics counter studying what product is in vogue today to make sure she is right up there with the celebrities with the very latest beauty care. You can imagine, therefore, that she was somewhat horrified to find that at the European judcial bench the view is very different. Here is her blog: 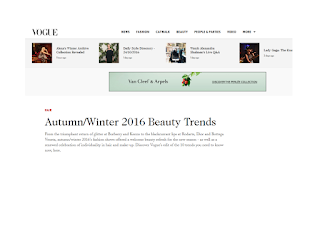 Sometimes when you are reading – a few words give pause for thought. This morning it was an observation of the General Court that “fashion is not concerned with beauty care products”. These words can be found at the end of paragraph 24 of the Decision in Trinity Haircare AG v European Union Intellectual Property Office (EUIPO) [Case T 453/15 : 15th September 2016]: admirably reported by MARQUES. It’s an invalidity action where (for much of the case) the Applicant for invalidity appears to be trying to push “ vogue ” towards being generic for (any and all) goods in Class 3 e.g. to have “ … those cosmetics are vogue … “ sit alongside phrases like “ …… it hoovers up dust … “ and “ I’d like to xerox that page … “ and “ … pass me the sellotape … “.

I used the excellent search engine of BAILII to check that I’d not missed the word “generic “ in the Decision. The fact I hadn’t isn’t too surprising given that argument centred on Article 7(1)(b) (“not distinctive”) and Article 7(1)(c) (“descriptive” and “other characteristics”) rather than Article 7(1)(c) (“customary in current language or in bona fide and established practices of the trade”).


But “fashion is not concerned with beauty care products” ? Reading a little more of paragraph 24 provided the Court’s explanation : “EUIPO … is entitled to state that beauty care products are not fashion products, given that consumers buy them for their ‘result’, that is to say, the fact that the product moisturises well, deodorises well or has a pleasant scent ……… EUIPO rightly notes that the notion of fashion is connected with the permanent change linked to every season and every year. That is not the case with the goods at issue, in respect of which change is rarely linked to the change of season or year but to innovation, that is to say, the appearance of a new product in a position to satisfy the consumers’ unmet needs”.


I was hoping to find that “fashion is not concerned with beauty products” was a weak translation : but the Decision is only available in one other language – French – where the text is “la mode ne concerne pas les produits de soins et de beauté”.


I thought I might find a Tribunal of three male judges – but it’s two male and one female.


I was wondering whether I could simply delete “fashion is not concerned with beauty products” from the end of paragraph 24 but that doesn’t do away with the preceding explanation which (surely) is WRONG ? Try typing “cosmetics for winter” into a search engine : even VOGUE advertises cosmetics linked to season !


A few words gave pause for thought – I wish they hadn’t !

It's a well-known myth that legal advice is unaffordable.

It's also  generally assumed that lawyers won't help you for free in any commercial matter.

This is now wrong with the launch of a new service today 17 October 2016 to provide free assistance to those who can't afford it in the UK intellectual property scene.

This post is not for the intellectual property professionals, it's for those people who need help but believe they can't afford it and are tempted to do nothing when they receive aggressive letters from lawyers about some issue of a name, unauthorised use of a photograph or design or, worse still, something that mentions the evil patent word.

The IP pro bono scheme was launched today by Sean Dennehey, Acting
Chief Executive of the Intellectual Property Office. The service will not be provided by the IPO, who grant trademarks designs and patents and also provide mediation services and also operate a rather sterling phone helpline. The service providers will be fully qualified members of the Chartered Institute of Patent Attorneys, (who are providing the administration - good guys) the Chartered Institute of Trademark Attorneys or the Intellectual Property Lawyers Association

If you need help the first thing is to go to the new website http://www.ipprobono.org.uk/  download an application form and outline your problem. If you don't have access to a computer or scanning facitlites get to one of the PATLIB libraries for help.

It's never a great thing to be litigant in person, if you can get some professional assistance. For matters relating to intellectual property, particularly claims that are made in the Intellectual Property Enterprise Court any one of the above organisations can help you find paid advice. This scheme is for those who find themselves threatened or abused but don't have the resources to cope.


While the Daily Mail and others have highlighted the problems of County Court Judgements for debt, a default judgement in a trademark infringement matter can also result in a charging order on your house that means you can't sell it or other similar civil remedies. There are people in this position because they couldn't or did't get help. The purpose of this scheme is so that it doesn't happen again. Even when you find you are in the wrong, there are ways to minimise the pain and most IP owners would prefer those solutions rather than silence. 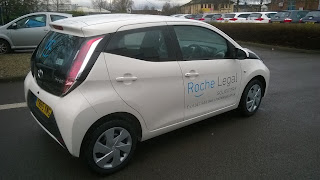 When I arrived in York I was pleased to be very rapidly introduced by an entrepreneur to a solicitor who organised the local sole practitioner's group. I even found they had several Intellectual Property members who were old friends. The group encompasses a wide range of specialistations but most were solo rather than sole solicitors managing an army of unqualified staff that have given the SOLE name a dubious reputation to some.

The first meeting I attended in late September was at the offices of Roche Legal. Rachel specialises in family law, probate and court of protection issues. Young, energetic, caring and careful would be my description. She also has a nice line in corporate branding. When I get a car I must remember to splash my logo on it. More seriously a branded car is quite helpful to identify yourself when visiting an elderly or cautious client.

The discussion turned to the relaxation or simplification of the SRA Handbook. The Law Society and this group were vehemently against these proposals. The image here shows the results of the Law Society survey. You can find full details here.  There was a strong confirmation bias in the way the Law Society carried out this survey. I suspect that many solicitors, particularly those of us practising in more esoteric areas like patents and trade marks with strong independent professional bodies, who felt that the recommendations made sense, simply didn't respond because it was pretty obvious that the Law Society were unlikely to listen to evidence that did not corroborate their very strong distaste for these simplifications.

The problem, for example, of saying that solicitors should not work in unregulated firms is that they do and have done for years. Will allowing them to say they are solicitors rather than solicitor (non-practising) make any difference to the consumer.

The real problem is that the SOLICITOR brand is no longer a  mark of quality. It has been brought into disrepute by the media and even the judiciary as well as some solicitors themselves because of overcharging or just being expensive. This is quite separate from damage done to the brand by those who provide poor services or run off with your inheritance. There was support at our meeting in York for a two-tier profession with the elite being able to use some postnominals (that's letters after your name) or other protected title that would mark them out as the good guys who were trained and accepted detailed regulation. Could we promote ourselves for example by that grand title SOLICITOR OF THE SUPREME COURT - which sadly was removed from us back in 2009 when the House of Lords became the Supreme Court and we became solicitors of the senior courts of England and Wales - so much less grand. As organizations like QUALITY solicitors have found, it's quite difficult to both maintain and get across the difference in a credible way and make a profit.

The Law Society, to give it its due, is doing its best to promote the SOLICITOR brand with a campaign that launched on 3 October 2106. See the #useasolictor hastag on twitter. Tweets about useasolicitor

For those of us in intellectual property we already have a reasonable quality mark in our CPA or MITMA postnominals. With the imminent launch of CITMA we should be able to give the public a strong branded message that the best legal advice on trade mark issues comes from a Chartered trademark agent, some of whom are also solicitors too!
Posted by Filemot at 20:37 5 comments: