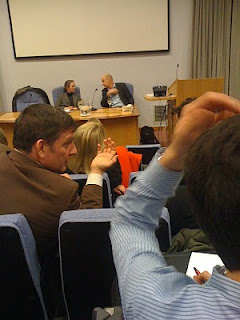 The Office for Legal Complaints is in Birmingham and as of  October 2010 it will be open to receive complaints about the quality of legal services provided to consumers and others considered vulnerable including businesses with a turnover of less than £1million.
As of now there is no way to complain about the quality of service provided by a patent or trademark attorney. Professional misconduct issues might be dealt with by the professional bodies and are now dealt with by IPreg
The Chief Ombudsman, Adam Sampson - he at the front on the right in the picture - had the pleasure of speaking last night to a gathering of trademark  agents. He promises to cope in a paperless office and only to charge a case fee of £400 law firm against whom a third complaint is made in a year. He can order compensation of up to £30k to be paid and order work to be redone or an apology be made. Complaints are to be resolved by a non-judicial process, but only after the regulated person has processed the complaint through their own procedures and delivered the result to the client with a notification that the complaint can be sent to the Ombudsman if he is not satisfied.
The Office has no intention to advertise but it seems likely that it will attract complaints from those who are victims of unregulated lawyers including patent advisors and trademark agents. I asked how he would deal with them. The Ombudsman was uncertain how he might deal with them but seemed up to the task of dealing with any that came forward.
However, most regulated patent and registered trademark attorneys may  aspire to have clients who are not within the jurisdiction of our new noble Ombudsman. Such clients are to be expected to claim their recompense via the courts.
It is sometimes the case that a private inventor may have unreasonable expectations of a patent agent and this can lead to complaints. These now have an outlet. I think the Ombudsman may delight in dealing with the same.