A couple of quick questions

1. Posting to the members-only Obscure IP Group on LinkedIn, Kayanne Horgan has been speculating as to whether trade mark attorneys might expect to see a surge in registrations once the new Icann gTLD program is launched in January? I'm not sure whether this is a reference to trade mark registrations (hooray!) or gTLD registrations (boo!), but in either case it would be good to know whether a flood -- or even a trickle -- of registration work might be expected to materialise, in which case readers of this blog are warmly advised not to book their summer holidays for January, when everything's a bit cheaper.

2. The IPKat has been mewing about the problem of costs orders for relatively small sums that remain unpaid by unsuccessful opponents at OHIM and indeed in the UK Intellectual Property Office. Some readers have posted comments suggesting that costs should be scrapped entirely, while voters in the Kat's poll -- who were not given the option of scrapping costs orders -- currently favour requiring opponents in office proceedings to be made to give security for costs. Thoughts, anyone? 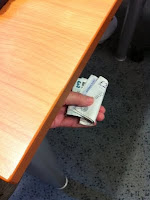 Hopefully, we can all recognise that a cash bribe passing under the table is unlawful. However, the publicity surrounding the recent implementation of the Bribery Act in England has called into question normal law firm marketing practices and behaviours. No longer is it possible for an in-house lawyer to go out to lunch without some quip being made as to whether such behaviour could be a bribe.

Since the media encourages a very judgemental attitude to those who transgress in any way - whether they be MPs in receipt of expenses, newspaper publishers or looters, it's not a good idea to find yourself on the wrong side of the law. However,creating such an environment of angst does make life difficult for those who promote their businesses using sponsorship. Once upon a time, there was some credibility that if you were speaking at a conference you were a legal expert. Now that your contribution is clearly marked as that of a sponsor, its value is much degraded. Have a look at the programme for the Legal Week Corporate Counsel Conference.

Today I received a query from CIPA - the professional body of UK patent attorneys - who are making a risk assessment exercise concerning the activities of the Institute in order to establish a Bribery Act policy. Apart from a few paid staff, all work done for the benefit of the Institute is by volunteer members. The retired ones maybe do it for love because they like to keep in touch, but those who could be earning substantial hourly rates, justify their involvement to their partners by the kudos they receive as a member of Council or as a speaker at a CIPA conference.

Equally, I was rather surprised that ITMA circulated all its members with the suggestion that they should volunteer to speak at the London evening meetings. We thought they invited the best qualified speakers, but perhaps they felt they had to be more open. Even so, if you volunteer, you will be branded a self publicist rather than an altruist - most people would prefer to be invitedas a result of peer-reviewed recommendation and it seems now that invitations are at risk of being considered bribes. Those on the outside are always afraid of a closed shop, especially if they cannot see the door. Just look at the comments on our last post on the supply of intellectual property advice in Northern Ireland.

Maybe the Bribery Act will have the effect of introducing greater transparency into the selection and payment of speakers at allegedly educational events.  Nevertheless, we may find that the absence of good wine and dining incentives, because they might be considered as a bribe, will threaten the whole business model under which professional bodies like CIPA and ITMA operate.  Do you think that's a good thing?

Two newly published Tribunal Practice Notes from the UK IPO suggest that there may be problems arising due to the reduced numbers of parties taking the opportunity to have professional representation before the tribunals during Oppositions. The first notice TPN 1/2011 concerns editing of specifications where only part of the specification has been opposed; and the second TPN 2/2011 case management and the dreaded extension of time requests.

Dear Trademark Applicant /Opponent:
Yes it is possible to represent your own business. Some business managers even find it fun and challenging. However it is distracting you from your day job and you may be better off seeking out help from one of the many good IP law practitioners out there. If you are confident enough to have a go yourself, then you are clearly competent to negotiate a fixed price deal with a professional. If you must oppose - oppose everything. It can always be cut down later. However a long- winded opposition may not be the best way to deal with a real commercial problem. Spend the time to establish what you want and need and then consult a professional to see if you can achieve it.


Meanwhile are there other solutions the IPO should be looking at. Appointing some legally qualified hearing officers from the junior bar or retired solicitors and using case management more actively to get cases mediated or resolved without evidence. More interlocutory hearings on extensions cannot be the answer as this merely adds to the cost and the acrimony.

And the profession? do we need to go the Quality Solicitors route with Quality Trademark Professionals?
Posted by Filemot at 10:35 No comments:

Today's post on PatLit about litigating patents in Northern Ireland set me thinking. While Northern Ireland is governed by much the same statutory provisions covering intellectual property law as is the rest of the United Kingdom, its small population (fewer than 2 million) and largely agrarian economy probably offer less scope for developing an intellectual property-based practice and in building concentrations of expertise.  Also, because of its geographical isolation, IP practitioners must inevitably find it difficult to network with professional colleagues, attend seminars and so on.  The spread of the internet  and the increased use of webinars, Skype and the social media may have ameliorated the position, but being an IP specialist in private practice in Northern Ireland must still be quite a lonely job.

Does SOLO IP have any Northern Ireland readers out there who would like to share their thoughts and feelings with others -- or who can disabuse this blogger of the impression he has painted above? If so, we'll be delighted to hear from you.
Posted by Jeremy at 13:37 7 comments:

Vince Cable was at the British Library this morning to announce the government's response to the Hargreaves review. Naturally, the media is focusing on those elements which relate to file copying, sharing and Internet blocking. See the BBC here, the Next Web  here and the Guardian here .  It is indeed very welcome to see that there will be proposals for a substantial opening up of the UK copyright exemptions - so maybe there will be some fair use arriving after all.

However, down in the bowels of the Hargreaves report there was a discussion about SME access to IP advice. What does the government intend to do? Well you will be delighted to learn that later this year, the IPO will set out its plans to improve accessability of the IP system to smaller companies, including access to lower cost providers of integrated IP legal and commercial advice.

Does that mean I can advertise on the idea websites for free if I agree to charge less than the market leaders?  Does it mean that they will reinvent the recently abolished Business Link advisers? Since "integrated IP legal and commercial advice" is not a known sector, perhaps we will find the IPO looking more kindly at self-appointed patent strategists. In any event, its a good phrase to put on your letterhead and to include on your website. Get marketing!
Posted by Filemot at 12:01 No comments: