Worliday is a term coined by Lucy Kellaway, of the Financial Times, in an article earlier this summer. A ‘Worliday is a bit like a holiday and a bit like work. ‘It’s the future for most professional workers, and actually, contrary to what most people would have you believe, worliday is really rather nice’, she states.

Having just come back from my own worliday I entirely agree. As someone running my own law firm, the idea of a holiday without any connection to the office seems both challenging and unnecessary. Modern technology is a real boon in enabling people like me to continue overseeing the office whilst on holiday. As Lucy Kellaway points out ‘the worliday is not family unfriendly at all as families get twice as many holidays.’

However, the idea of taking a ‘worliday’ has received mixed reviews from bloggers.

Chris Abram of ‘Marketing Conversations’, blogged in praise of the worliday, claiming that ‘working at Abraham Harrison is a little like an everyday worliday if you play it right and get your work done’.

On the other hand, Tim Bratton General Counsel of the FT who tweets as @legalbrat likes his holidays to be just that, a holiday. He wrote a blog disagreeing with Lucy’s pro worliday stance. He feels the need for a holiday that is totally work free. He wants to relax and recharge. George Marshall agreed with him, stating ‘Leisure should by default dominate every day of your life with work being a mere sideshow.’ 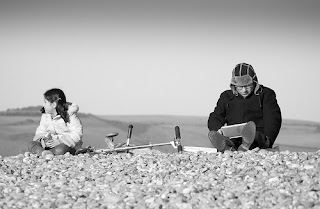 Although combining a holiday with work may seem the opposite of relaxing for these bloggers, in my view the ability to work remotely whenever we like, whether we are on holiday or travelling on business, represents freedom.

I wonder whether this divergence of opinions has something to do with the fact that women are reportedly (though not scientifically proven) believed to be better at multi tasking than men. Or is it just that people who run their own businesses are never off duty (and possibly don’t want to be)?

Tim Bratton criticises technology for encouraging us to work more, asking ‘is that really what we’re inventing new technology for? To make it easier to work?’

I disagree with this view because I feel that technology enables people to have the freedom to work where they want and when they want. Having the choice is what matters.

Technology gives those of us who run our own businesses the opportunity to go on a relaxing holiday and spend time with our families, and yet not worry about how the business is doing, and whether it is coping in our absence.

I have no problem combining relaxation with work. Indeed, I so love my business, that a worliday presents an ideal opportunity to work ON the business as it gives me more time to think when I'm sitting by the pool, or taking a walk. I come back recharged, with many new ideas for the business, while having spent quality time with my family.

I do find working IN the business less pleasurable, and so avoid doing the actual work as much as possible whilst on holiday.  However, even when that is unavoidable, taking a half day to deal with something doesn’t spoil the holiday for me.  It doesn't mean I haven’t had “work life” balance. I wonder what fellow IP practitioners think?

These are a few further reflections from the seminar on Wednesday. 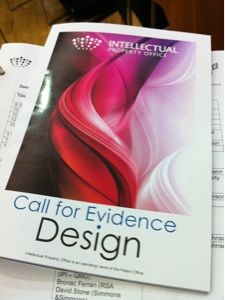 As part of its efforts to implement Hargreaves, the IPO has launched a call for evidence and the idea of the seminar was to review and discuss the results of the research ("evidence") that has already been delivered to the IPO.

There is also a survey (not for lawyers, but for our design clients) and then we get a formal consultation which will likely contain some substantive proposals for change to UK design law. Prepare to say a fond farewell to the much mangled Registered Designs Act 1949 and lets look forward to a whole new codification of design law that kicks out copyright and gives a national system  that is understandable and consistent with European law.

Design registration in the UK has never had the uptake governments would have expected and the UK IPO would like to know why. I confess I do too. Since we work with clients with an interest in design perhaps we have some insights we can share with the IPO team. Personally I struggle to add value for design clients. Once they have grasped how to get the drawings right then its often better to make the applications themselves as the idea is its supposed to be a cheap and easy process. Getting the drawings right is no mean feat. Some unscientific  research on the UK Designs Register shows that most applicants do represent themselves and if you are a litigator you might worry a lot if you were trying to rely on some of these registrations.

Proposal 1 for further research then is to analyse the users of the current system from the UK and see whether they feel they can access the support and help they need to make the system work for them. 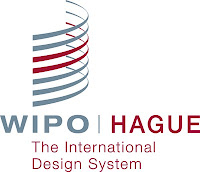 The paper based filing system is the first problem area and the purring of the IPkat has already been heard by the IPO team and it got plenty of support at the seminar. However you can understand some reluctance to implement a system if it will be underused. WIPO was represented at the Seminar by Gregoire Bisson who runs the Hague system. He reports that his software came from OHIM but they have improved it. It certainly seems to pass the useability test for the in-house user.  If he can get the US to join Hague (and he has it in the sights)  then he will have a much more valuable system.

The focus of the seminar tended to be on the designer and it assumed that copying was bad. We need to test that.  Registration and attempted enforcement of unoriginal design could have a chilling effect on creativity and the London Design Festival, which ended yesterday, certainly shows that the UK has the creativity.   Chapter 3 of the Research a paper based on a small pilot study showed that experience of copying did not increase likelihood of registration. Proposal 2 is that the attitude to copying needs to be investigated and understood. Anecdotally I can say that there seems to be a preference for *muttering*;   getting media attention and even the deplorable practice of sending cease and desist letters with no intention of follow -up enforcement.  Is this because UK business has lost faith in the judicial system or that there is a rationalization that the actual damage does not justify even the management time of serious complaint.  Maybe even its a *do as you would be done by* approach. If I complain will I find myself at the receiving end of complaints.

Design protection needs to be manageable more like copyright protection than patent protection. Maybe we should see the IPO offering more advice and support in the development and implementation of protection strategies. Perhaps the call for evidence can support a pilot workshop or two to give how to file advice to those who should be using the design system so that it is clearer how or whether online filing would help. That is Proposal 3.

What do you think - is there a future for design protection in the UK or should we just leave it to Europe and use this legislative opportunity to delete the UK law on this topic.

Email ThisBlogThis!Share to TwitterShare to FacebookShare to Pinterest
Labels: design

Tony Clayton of the IPO has been bringing economic perspective to IP issues for two years. This is my first mobile post so sorry if it's a bit terse. 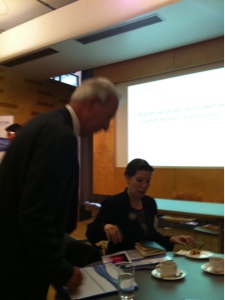 As we face the next Great Depression, most of us are thinking of ways to make sure we have a good client base and an excellent reputation that will see us through. Our problem is to make the relevant public look for us.  Qualified and Professional advisers in trademark matters usually means a specialist IP solicitor or a "Registered" Trademark agent. Anyone can represent a trademark applicant. Its just like will writing. Its not regulated. Unlike will writing its likely to stay that way.

Reading a recent UK-IPO decision, I noted that the hearing officer had said "This is a case where every step has been unnecessarily protracted, by sniping and nitpicking." One of the parties was unrepresented, the other was represented by a named person, Mr Whyatt, not on the solicitor's register nor on the ITMA list of experts but he is a public access barrister so that should be even better, but nevertheless he got some serious criticism:


"Mr Whyatt would appear to be disingenuous and verbose in his response, and has managed to extend his counterstatements to cover seven pages (2052091) and eight pages (2307158) when both could easily have been answered in two pages."

The impression I get from the IPO is that they are not happy with the quality of representation and I don't think its limited to just this case. Is there anything we can do about it to help clients look for advisers that will offer them an efficient, well-informed service designed to achieve a reasonable result in the least time in order to allow the client to get on with his business. I want to see a quality standard so that an unrepresented person will know he is better of represented. Can we perhaps design a Quality Pledge a contract between client and representative to smooth things along. Maybe

Equally there may be things the representatives and clients want from the Hearing Officers , so what about a debate to discuss it?