Databases Galore : Patent and Trademark Due Diligence Made Easy

The competition is hotting up between the Patent Offices of the world to produce even better and more accessible databases. Today the UK join with a beta version of  IPSUM a UK patent register that offers access to the documents issued by the Patent Office during the prosecution of recent applications. It also allows easy access to the Espacenet records of citations. 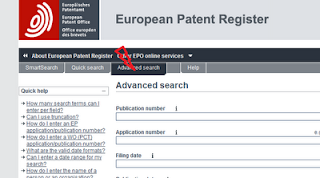 The EPO has also recently updated the EPO Register  and made its alert service (now called Register Alert instead of WebRegMT) much more accessible. The EPO show you the whole file including the correspondence from the agent. Also don't miss the tabs along the top that allow some very sophisticated searches to be carried out directly on the register.


The OHIM have been keeping up too. TMView is celebrating its first anniversary and although not yet comprehensive it is the best way to search for free across multiple country databases. French data is promised soon and we would like see German data so that there is a good prospect of spotting most of the big issues with a prospective new mark in one operation. You won't be able to clear a mark with this alone but you can certainly eliminate some items off a list.

The second OHIM effort is eSearch Plus Beta which combines the ability to search Community Trademarks and Community Registered Designs.  This really is a Beta version and some of the results are not up to date or complete. Representations were missing last week. If you want to see how it should work, here is their nice demo.

To complete the novelties we must mention the Global Brands Database which is a SERIOUSLY misleading title because it means Madrid registrations, International Emblems protected by the Paris Convention and Appellations of Origin, which leaves a lot of the globe left out. Moreover its only fair to say that the Emblems are the only thing with anything like global protection.  This tool has some amazing features including the ability to see results shown on a Map. The illustration on the right is for the origin of everything in the database. You could spend all day with this database discovering the most fascinating facts.

On 30 March the BBC  broadcast a radio programme on Intellectual Property Law in their Unreliable Evidence series hosted by Clive Anderson. You can listen on the iPlayer. A cast of IP experts was in the studio. Michael Fysh, Charlotte May, counsel, Stephen Rowan from the IPO who apparently now rejoices in the title of Deputy Director of the mysterious Copyright and  IP Enforcement Directorate and Paul Stevens from Olswang.

Although the programme was clearly inspired by the Hargreaves Review, the debate singularly failed to highlight potential areas of reform. Indeed during  the section on copyright (16 minutes in) the group seemed placidly to accept that 70 years post mortem was the right term for copyright.  It was left to Michael Fysh to eventually insert a dissenting voice. Clive Anderson - extremely well briefed - made several provocative assertions suggesting there might be copyright in program formats, designer clothing and domain names.

The programme was successful in showing that IP law is diverse and complex. It does not make a good starting point for any business listener but its a worthwhile listen if you are in the business, if only to spot the errors. Perhaps the BBC can commission Clive to produce a series of more educational programmes on the separate areas of IP.

The programme began with a brief introduction piece from Baroness Wilcox. She hit the wrong note for a discussion on whether the law has the balance right,  by drawing attention to a windfall her business had made from an unused trademark  (4 minutes in).

Its great to hear popular radio about legal issues. Keep at it IPO.
Posted by Filemot at 20:54 1 comment: