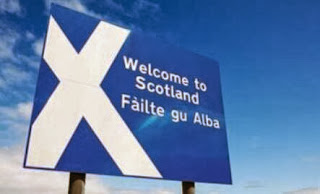 SCOTLAND’S FUTURE – YOUR GUIDE TO AN INDEPENDENT SCOTLAND is is a title that’s descriptive (rather than distinctive) but it may well attract more readers than (say) ASPIRATIONS FOR SCOTLAND IF THERE’S A “YES” VOTE ON 18 SEPTEMBER 2014.

Also, this writer regularly spends time in Cumbria - where legal work leaving the county might go north (maybe Glasgow or Edinburgh) rather than south. Hence, whilst 24 March 2016 (proposed for “Scottish Independence Day” if there’s a “YES” vote) is comfortably in the future, it’s appropriate to find time to scan SCOTLAND’S FUTURE for clues on possible new regimes for (a) company names, and (b) Domain Names, and (c) trade marks.

SCOTLAND’S FUTURE refers to the new .scot Domain Name applied for by the Dot Scot Registry Limited (a not-for-profit company) which has an estimated launch date in 2015 - after 18 September 2014 but before the date proposed for Scottish Independence Day if there’s a “YES” vote.

The press has reported widely both (i) Scotland’s aspiration for transition to independent membership of the European Union, and (ii) Scotland’s aspiration to succeed to international treaties. In the latter context, SCOTLAND’S FUTURE identifies the World Trade Organisation (WIPO) as one of the multi-national organisations in which an independent Scotland will participate.

Further, a passage headed “Intellectual Property” begins with “We will ensure continuity of the legal framework for protecting intellectual property rights” then continues (rather rudely) with “Independence will allow Scotland to offer a simpler and cheaper, more business-friendly model than the current UK system, which is bureaucratic and expensive, especially for small firms”. These same points are made in Questions / Answers which include the grandiose promise that “Scotland will meet [European Union] regulations and directives on IP rights protection, as well as international patent and trademark (sic) protections”.

Otherwise, there are tantalising hints :
The website at www.scotreferendum.com suggests comments and questions are sent to referendum2014@scot.gov.uk. But this writer won’t be commenting or questioning as she’s no wish to add to the figure of £ 13,700,000 which is the estimated cost of the referendum !