How to make a mint? Try giving it away first

How do you get people to remember who you are when you are attending, or indeed sponsoring, a sizeable international intellectual property conference. Not many people spend their time fretting about this and, of those who do, scarcely any are likely to be practitioners who run their own solo or small-size practice.

Our colleague Michael Factor was faced with the "how to make your mark" issue at this week's "From IP to NP (net profit)" conference in Tel-Aviv, which you may have read about via various posts on the IPKat and one (on generating value from patents) on IP Finance -- or which may have crossed your line of vision via the Twitter hashtag #ipnp.

What could he do to conjure up a lasting impression on a hard-bitten audience of conference-goers? Mouse mats are at last out of fashion; pens even more so. Notepads are so low-tech these days and packs of repositionable adhesive notelets are somehow unable to convey the right impression in a world that is increasingly moving towards paperless and electronic documents and materials. Getting your name on the conference carry-bag can be very costly; picking up the tab for a reception likewise.

Anyway, rather than fall back on the safe but unexciting recourse to handing out a side of A4, extolling the virtues of his practice, patent attorney Michael chose to insert in each delegate pack a box of PCTea-bags ("for peace of mind with patent services"). Herbal infusions are not everyone's cup of tea, but a box of bags will usually last much longer than a sponsor's bar of chocolate. 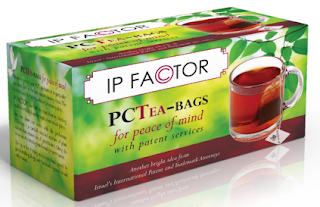 This unusually tasty, if not also tasteful, goody is the sort of marketing tool that can do really well: people tend not to throw away a box of green tea and mint infusions, and will be more likely to give them to someone else at work than to jettison them entirely, given the presumption against throwing away anything that can eaten, drunk, stuck on a fridge door or pinned to a wall.  The box is therefore potentially a persisten reminder of Michael's continued existence and indeed of his appearance since his IP Factor caricature image appears on it too.  Whether this memento works, and serves to bring in new business, or whether on the contrary it puts people off green tea and mint infusions, remains to be seen.

Can readers point to any other imaginative and ideally affordable ways of making a mark at a big event?