Sally knits her way to #INTA14

There are memories of graduating to “joined up writing”. First, you learned each of the letters of the English alphabet - all twenty-six of them. Then, at a magical moment, you moved on to “joined up writing” which meant you were allowed (with the help of pen and ink) to join letters together. 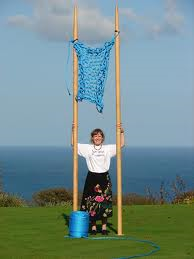 So I create a (spurious) link between the following found recently in the blogosphere :

1) That people recall words in BIG LETTERS (and even in Big Letters) more easily than words in big letters : See The Telegraph Article describing this Spanish research

2) That sometimes we want to understand the reason someone says no as in this blogger's distressing story of having their App rejected.

3) That there people who find time to crochet cats, obviously there are

The spurious link (as you’ve guessed) is INTA simply because :

a) I’m going to find in Hong Kong some BIG BRANDS and some Big Brands and some big brands and – even when their names are not presented in US-English or UK-English – I’m going to hope I understand the stories they want to tell
b) I like the idea posted in comment on (2) that “When you get angry and feel like no one will listen to you, you can always make something” : it kind of justifies the reason for blogging
c) I reach for my (plastic) knitting needles and a ball of purple cotton and pack these – hoping there’ll be time on flights to knit something resembling a kat [ sic ].

If not they have guerrilla crochet on the Hong Kong streets

Email ThisBlogThis!Share to TwitterShare to FacebookShare to Pinterest
Labels: INTA14