A goose-step for IP recruitment? 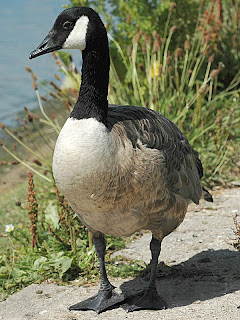 If you've been thinking of chucking it all in, abandoning all pretensions of sole practice and getting a real job instead, your thoughts will turn towards the choice of a recruitment firm to aid you. In this context, "Controversial Goose Attack Video Launches Intellectual Property Recruitment Firm; Fellows and Associates" (see Marketing News Today, here) might just influence your decision.

Right: this is not the actual goose, but a lookalike body-double ...

According to the this article,

"Patent and Trade Mark Attorney recruitment firm, Fellows and Associates launches its brand with a YouTube video entitled ‘Goose Attack At Wedding’. The video, which features a photographer in an entanglement with a goose, was released on YouTube, Dailymotion, and other leading sites last week. The photographer’s unconventional approach to problem solving could be seen as controversial.

The video was filmed guerrilla style in Leeds, West Yorkshire, with a combination of professional actors, film crew and extras (including the part of the photographer) recruited via Facebook and Gumtree. Alan Jones who plays the photographer said, “I was really excited to see myself on YouTube but hope my debut is not too controversial. It’s been a real demonstration of what can be achieved and shows businesses that perhaps would not have traditionally advertised on Television that they can produce a fantastic result and be able to distribute their work in an audiovisual format.” There has so far been no comment from the goose.

The film took three months to develop with the majority of that time spent brainstorming ideas with the production team. Concepts that were dismissed included running across cows, beat boxing, large inflatables, kids driving trucks, 1950s style educational films and building a time machine. “The aim was to find an idea that was provocative in order to elicit a response and maximise the video’s potential for spreading virally whilst maintaining a balance of responsible advertising” says Fellows and Associates Managing Director, Pete Fellows.

Fellows and Associates are the first UK recruitment firm in the Intellectual Property sector to experiment with viral video advertising.

“Our competitors in Intellectual Property sector recruitment do not make the best use of the online resources available,” says Pete “we believe a social networking strategy including sites such as Twitter, Linkedin, Facebook and YouTube is now crucial to brand awareness and building on our network of contacts throughout the world ...."

Three months, for a 56-second do-it-yourself-style video? You can form your own opinion if it's worthwhile ...