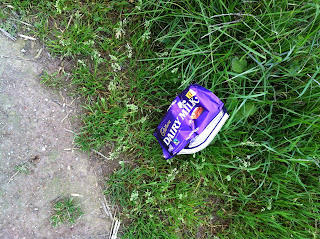 As I walked the dog the day after the Court of Appeal had dashed the hopes of Cadbury's by rejecting its attempt to register the colour purple, I saw this discarded wrapper by the side of the path. The photo was taken with a camera phone. It deals with blues and purples badly. It is a genuine wrapper and yes, dear reader, I picked it up and attempted to  lodge it in the correct recycling bin.
I doubt that this failure will result in Cadbury or their new brand family in the mother ship, Mondelez abandoning the shade, though maybe this application is doomed if the Supreme Court are not interested in its rescue.
In my office drawer there are several purple wrapped chocolates that I purchased last year, at random from a supermarket, in order to try and explain to a lay client what the trademark registration:

might mean and whether these products were in or outside the scope of protection.

One is a marginally different shade, another was small and had another illustration that led to a debate about predominately. They kept us happily amused over a glass or two of wine and perhaps one client has decided that colour alone is too brave for their business.

Sir John Mummery felt that both Allan James of the IPO and Judge Birss had erred, was in failing to see the description as part of the sign. In his view: "There is wrapped up in the verbal description of the mark an unknown number of signs". The pun was probably intended but the emphasis is added. The description was also the root of the problem for Sir Timothy Lloyd, and Lord Justice Lewison agreed with both.

At first blush it might seem that the mark might fare better without a description. After all, when I file a word mark, I do not describe how or where I am going to use it. The product is my canvas. I might cover it predominantly with the mark in big letters or choose to use it small. No one has said (up to now) that that was not a sign.

Perhaps the problem with colour is that we avid consumers don't see it as a sign, unless we have been educated by use to recognise it as such. Everyone was agreed that as a matter of fact that colour meant Cadbury's chocolate and was an indication of origin. However if we give them an exclusive right to use a shade or anything similar confectionery wrapping even without any intention to pass off becomes fraught with difficulty.   But if the evidence is accepted, and that finding of fact was not challenged by Nestlé, it seems that Pantone 2685C is off limits. Fact.

The Court also said: "Speculation by this court about the future direction of trade mark law at this stage of development would not help anyone".Such a shame as the Commission has suggested that the Directive should be amended to clarify that a sign does not have to be represented graphically and can be a "colour as such". If we have good passing off/unfair competition rights, it might be better policy for colours as such to stay off the register.

It seems to me that the decision feels right, but that the Supreme Court might need to wonder about the reasoning. The decision was paired with the Mattel/Zynga case before the same panel with a more problematic concept mark : the Scrabble tile, which had been accepted as registrable by the IPO but had not survived the court challenge below. It suffered from its description covering too many signs.

If you need to describe your sign, your problems have begun. Leave drafting descriptions to patent agents is what I say