Proceedings before the European Patent Office 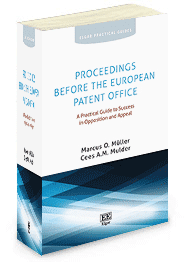 Not many blog posts recently. I have been reading a new book from Edward Elgar . They kindly sent me an ebook to review but as its very attractively priced at £44 for the paperback if you buy it on line, I recommend it to all practising patent agents and trainees. Its been written by Marcus O. Müller (a chemist) of the Boards of Appeal of the European Patent Office, Munich, Germany,  and Cees A.M. Mulder, European Patent Attorney, Maastricht University, the Netherlands in the style of dumbed up  a FOR DUMMIES book.

What you get is a candid, accurate and informative guide to how the EPO's judicial process works. There are a myriad of out take  Examples and Practical Advice paragraphs designed to make the attorney more effective in this unique environment. How to play with added subject matter and Article 84 are just some of many ploys on which both seasoned and novice attorneys will receive enlightenment by reviewing this text and taking its lessons to heart.

It has been published with the approval of the EPO. The text is completely uncritical but the critical (but hitherto ignorant) reader might find themselves crying aloud about some of the examples given and there are lots. If you happen not to be experienced in EPO opposition procedure but have read suggestions that the procedure of the new Unified Patent Court should be more EPO like (or even that the IPEC procedure already is) , this book will explain what they mean and you should read it so you can stop that idea in its tracks.

However the EPO procedure is what entrepreneurs have, if they are to get a European Patent or a Unitary Patent in the future. You can't get to the wonderland of the Unified Patent Court if your patent can't survive the opposition stage.  Your competitors will take you there if your patent could be a problem for them or even if they just don't like you as costs are no deterrent. Normally each party bears their own costs - but Chapter 6 will explain when you might expect an apportionment of costs, but its not mentioned that it is ever to punish a vexatious opponent, and it is not.

The book isn't aimed at inventors but one who has been to the EPO and may find himself there again defending a genuine invention may find it valuable. It will tell him not to employ an "old school" agent - who according to the authors' practical advice is one who writes the application with ambiguous terms, woolly stories, twists and turns, instead of in the way the EPO likes to see it, with a single, clearly defined invention, problem-and- solution approach, etc.The authors admit in their conclusion to the chapter on drafting issues that

"quite a few patents are lost after expensive opposition and appeal proceedings, even though there seems to have been an invention that could have led to a valid patent, simply because the original drafting of the patent application was not appropriate."

Although neither author is an English native, the book is very readable. If I had a trainee he would be reading it as required study in  his second year. I would give him a paper copy and check it at appraisal time. No dog eared corners and sticky notes would not be a good sign for his future career.  The insight it gives into how the opposition division and boards work behind the scenes is very useful. You learn how those alleged minutes are written and who is allowed water or recording equipment. You learn that its worth paying an appeal fee just in case and get the fee back if no one else appeals. I wonder how many appeals start because both sides appealed just in case.

This book is a valuable addition to sparse library available to practising patent agents. Hopefully it will be followed by other usable texts. We are now blessed with a whole academia of intellectual property that delight in studying the issues arising in big court decisions,  but much less is written to help agents make inventions become valid patents that will be valuable business assets. Well done Edward Elgar for bringing us something so usable.
Posted by Filemot at 20:56